‘We want justice, not fuel’: Sri Lanka’s Tamils on north-south divide – The Guardian

For months now, the sounds of protest and anger have rung out across Colombo, Sri Lanka’s largest city. Every day, along the city’s seafront promenade of Galle Face, people have gathered in their tens of thousands to rage against the government for plunging the country into its worst financial crisis in modern history.

But 200 miles north, in the district of Mullaitivu, the streets are silent. The economic crisis has hit Sri Lanka’s Tamil minority, who are concentrated in the north and eastern provinces, as hard as those in the south; the fishermen here say they are already starving. But they will also tell you that protesting is a privilege in Sri Lanka – one they have never been afforded.

“If we staged a protest here like they are doing in Galle Face, they would shoot us dead,” said Ravikaran Thurairajah, 58, a former councillor from Mullaitivu who has been arrested 14 times for his involvement in local peaceful demonstrations. “We respect their struggle, but we don’t see our struggles represented there.”

It was 13 years ago that Sri Lanka’s three-decade civil war between the Tamil separatist militant group, the Liberation Tigers of Tamil Eelam (LTTE) – commonly known as the Tamil Tigers – and the Sri Lankan military came to a bloody end in this district. Tens of thousands lost their lives as the LTTE was defeated and up to 100,000 people, mostly Tamils, were abducted by the Sri Lankan armed forces and never seen again.

Since then, many in Mullaitivu have not stopped demanding justice, accountability and political representation for Tamils. Among them is Mariasuresh Eswari, 49, whose husband, Mariyadas, a fisher, was taken by the navy in March 2009 as he went to collect his catch. He never came back.

In a protest that has gone on for more than 3,000 days, dozens of wives and mothers have sat in a camp outside the local administrative offices, demanding the return of their loved ones or answers as to where they are. But the price these women pay is heavy.

“Every time we protest, they issue court orders to stop us,” said Eswari. “We have been harassed, groped and beaten by police. They use indecent language against us, and I had to be hospitalised recently after police used force against us. Military intelligence has us under constant surveillance.”

With tears in her eyes, she pointed to her husband’s photograph on the wall, yellowing and mottled with age. All around in this makeshift office, the missing people of Mullaitivu stare out hauntingly from the walls: old men with furrowed brows, girls stiff in school uniforms with bows in their hair, and teenage boys awkwardly Photoshopped on to tropical backgrounds. 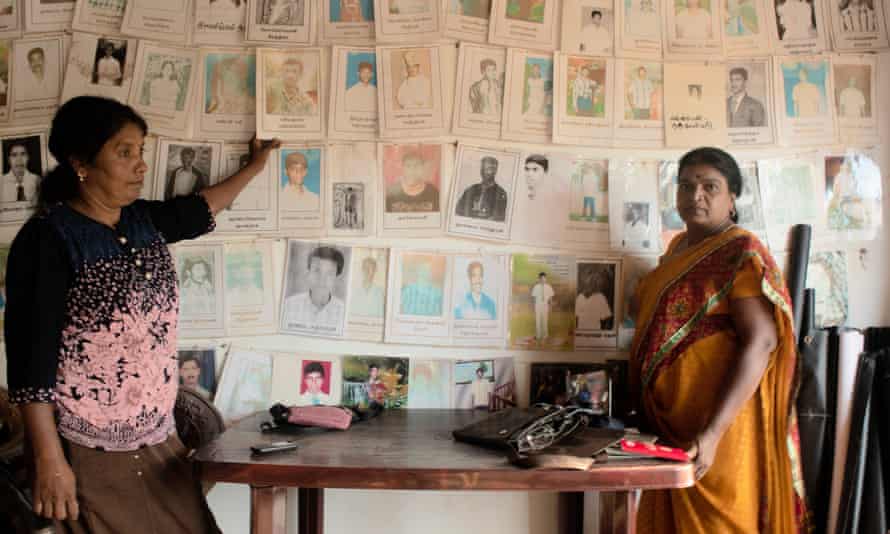 Mariasuresh Eswari points to her husband’s photograph, one of the thousands who disappeared in Mullaitivu during the war Photograph: Rubatheesan Sandran/The Guardian

“Where were the protests in the south when the military killed and took away our families?” asked Eswari, as she recounted clambering over dead bodies with her children in her arms as they tried to flee to safety at the end of the war. “It’s easy for them to protest there, it’s not the same here. When I see the Colombo protests, all I see is discrimination.”

While those in Mullaitivu are supportive of the calls in Colombo for the resignation of the president, Gotabaya Rajapaksa, who is part of Sri Lanka’s most powerful political family, there is also frustration. The Rajapaksa dynasty had always played on Sri Lanka’s ethnic tensions to gain the votes of the Sinhalese majority, and has almost no support among Tamils.

“We already rejected the Rajapaksas and their racist majoritarian politics a long time ago,” said Thurairajah, the former councillor. “Unlike those people in Colombo who are now protesting, we never voted for them in 2019. We always said this family would destroy this country.”

Mahinda Rajapaksa, the former president, was in power and Gotabaya Rajapaksa was head of the armed forces during the final, brutal phase of the war when most deaths occurred in the north. Since Gotabaya Rakapaksa became president, all progress towards war crimes tribunals and accountability mechanisms for wartime atrocities has been halted.

There were fears that by joining the economic protests, other issues inflicted on the Tamils in the north, particularly around land, would be drowned out. The loss of Tamil land to military and government agencies is seen by many as a concerted effort to change the demography of the region. Several local Hindu temples where Tamils have been worshipping for hundreds of years have recently been seized by the archaeology department for excavation, and new Buddhist temples are being built in their place.

In Mullaitivu, dozens of farmers have spent over a decade unsuccessfully trying to reclaim their land, which they say was illegally occupied by the military and where the Gotabaya naval base, named after the president, now stands.

“There have been invitations from the south for us to join them in protest, but there is a clear distinction from what they want and what we want,” said Prabhakaran Ranjana, 55, whose son has been missing since May 2009. “We don’t want fuel and economic assistance from the government, we want answers. We want justice for our people, we want our land back.”

Though widespread anti-government protests in Colombo have been largely dominated by the Singhalese-Buddhist majority – with Muslims and Christians also taking part – significant attempts have been made to include Tamils. An event was held where the national anthem was sung in Tamil, a very rare occurrence. And for the first time, memorials for those who died at the end of the war in Mullaitivu and a commemoration of the burning of the library in the Tamil city of Jaffna – considered one of the worst cultural atrocities carried out by the Sri Lankan military during the war – were held on 18 May.

Nonetheless, these efforts have all come up against issues exposing the continued ethnic segregation of the island. A Buddhist monk said on stage that the national anthem should only be sung in Singhala, and attempts were made to stop the Mullaitivu memorial on the basis that it was glorifying the Tamil Tigers. Conflicts over the language used in the memorial were particularly thorny; in the south, 18 May is celebrated as a day of victory, but in the north it is known as the anniversary of Mullaitivu genocide.

Unlike in the south, which has benefited from decades of investment and development, people in Mullaitivu said that dire economic circumstances were nothing new for them. During the war they had no access to sugar, milk or soap, and many survived on a boiled rice porridge, with the adults drinking the starchy water and giving the children the grains. “It feels like those war days again,” said Ranjana.

The mounting economic deprivation has, however, pushed one group in Mullaitvu to breaking point. Fishers said they were on the brink of starvation, as without paraffin to power their boats they could no longer go out to fish. Usually, 1,600 boats would go out a day, supporting about 12,000 jobs, but now they are lucky if they can send out any at all. 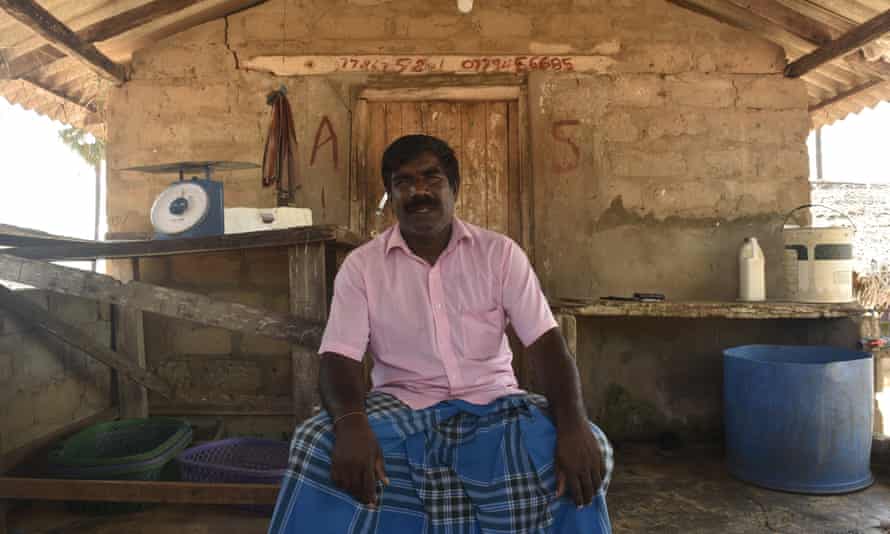 Fisherman like Alagarasa Rasarathina are facing starvation as a lack of fuel means they can not take out their boats Photograph: Rubatheesan Sandran/The Guardian

“There’s a bleak future for us if we don’t get fuel for the boats,” said Alagarasa Rasarathina, 53, who has been a fisher all his life. “If we want to eat, we need to go to sea.” The fishers said they were pooling their resources to buy some paraffin on the hidden market for seven times the usual price, but even that was hard to find, and would not have supported the community.

“It’s very difficult to share this small catch among all the fishermen – it’s not enough to feed all the families,” said Rasarathina. “People are already going hungry, they will start dying soon.”

Things were even tougher for the female labourers who depend on small pieces of work fixing and cleaning fishing nets in exchange for some of the catch. Now they have nothing at all. Vaithaijah Mariyai, 59, who lost five children in the war and relied on small pieces of work on the boats, is living off donations, the last of some leftover fish and some vegetables she picked from the side of the road. “I don’t know how I will survive after this,” she said.

The fishers have recently held protests outside the district offices, accusing the government of abandoning them to their deaths, but still no fuel has arrived. “Take a photograph of us,” said one fisher, Thiyakarasa Thiyagalingam, 42, as he sat looking out bleakly at all the grounded fishing boats. “I don’t know how much longer we will be here.”