Home » Where can Australians travel in 2023 without a visa?

Where can Australians travel in 2023 without a visa?

written by Top Stories Wed Jan 11, 5:50 am Source
Key PointsJapan has again topped the Henley Passport Index, with its citizens having visa-free access to 193 destinations.Australia came in eighth spot, with citizens able to travel to 185 international destinations without a visa.There are 42 destinations around the world where Australian passport holders require a visa to enter.Ever wondered which nation's passport wields the most power?While Australia comes in at equal eighth in , Japan remains in the top spot for the fifth consecutive year, offering its citizens visa-free access to a whopping 193 international destinations.The Index is compiled by London-based investment migration consultancy firm Henley & Partners, which uses data from the International Air Transport Authority (IATA) to compare the visa-free access of 199 nations' passports to 227 destinations.

In 2023, Singaporean and South Korean passports are the second most powerful in the world, followed by Germany and Spain in equal third. 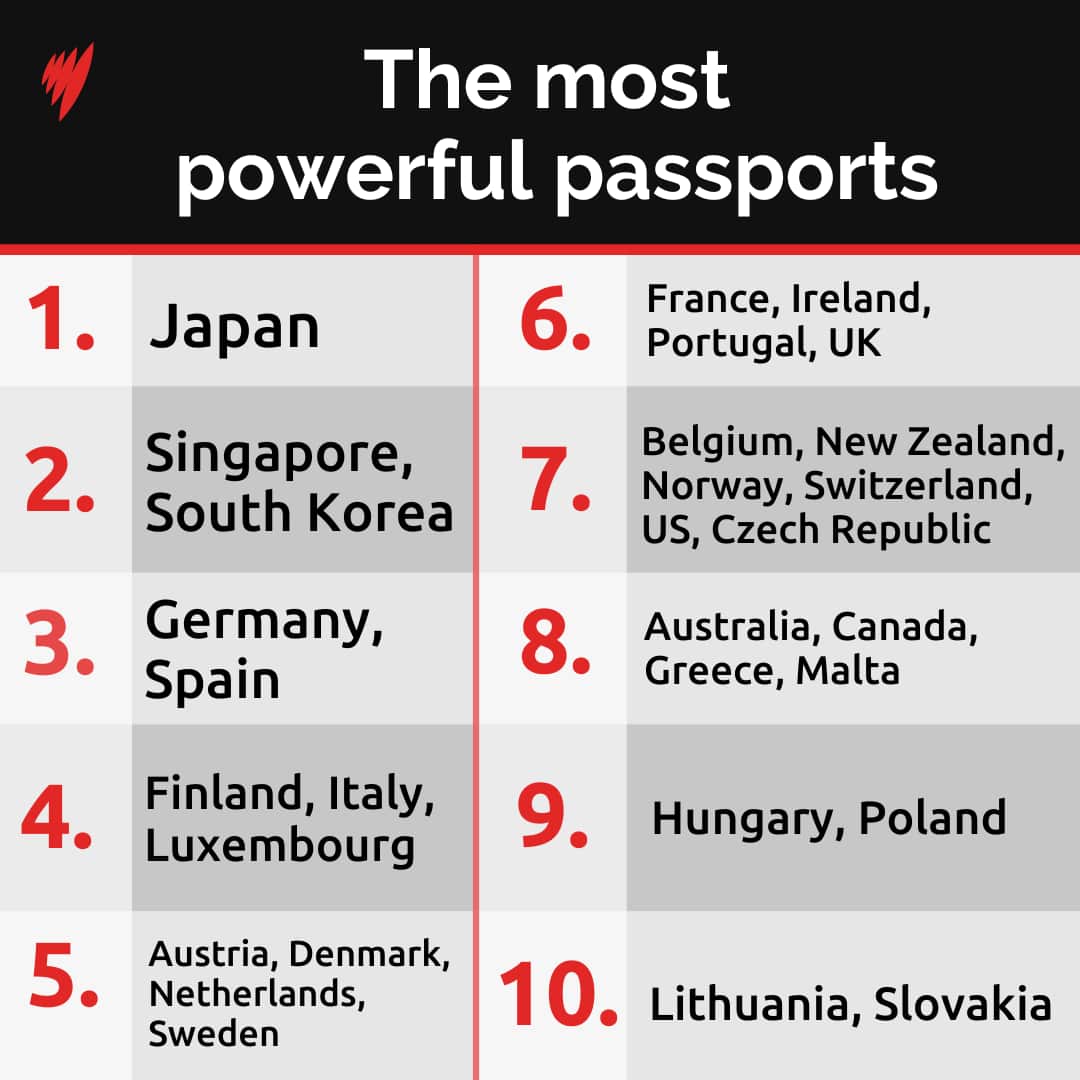 Afghanistan continues to languish at the bottom of the Index, followed by Iraq and Syria.

Countries Australians can travel to without a visa

There are 185 destinations can either travel to without needing a visa at all, or where they're able to obtain a visa, visitor's permit, or an electronic travel authority (ETA) upon arrival, according to the Henley Passport Index.Forty-nine European countries, from Portugal to Poland and the United Kingdom to war-torn Ukraine, offer Australians access without a visa.

There are more than a dozen destinations in Oceania that offer visa-free travel to Australians, including New Zealand, Fiji, and French Polynesia, and similar numbers in the Caribbean, including Barbados, the Cayman Islands, and Jamaica.

Nineteen places in the Americas don't require Australians to have a visa to enter, such as Argentina, Brazil, and Mexico, along with twelve African nations, including Botswana, Morocco, and Tunisia.Australians can visit 10 Asian destinations without a visa, including Hong Kong, Malaysia, and the Philippines, and six in the Middle East, including Israel and Qatar.

Cambodia, Egypt, Lebanon, Paraguay, and Samoa are among the more than 40 destinations around the world where Australians can get a visa or visitor's permit when they arrive, while ETAs are available upon entry to nations such as the United States, Canada, Pakistan, and Sri Lanka.

Countries Australians need a visa for

There are 42 destinations where Australian passport holders either need to obtain a visa before departure or get pre-approval from the government for a visa upon arrival.

More than half of them are in Africa, including Ghana, Kenya, and South Sudan.

Two regions have just one destination which requires Australian tourists to have visas - Cuba in the Caribbean, and Nauru in Oceania - while Asia has 10, including Afghanistan, China, and North Korea.

Australians planning a European trip that takes in Azerbaijan, Russia, or Turkey will also need a visa, as will those heading to Syria or Yemen in the Middle East, or Chile or Suriname in the Americas.

The most popular international travel destinations for Australians

Indonesia is the most popular international travel destination for Australian residents, according to the latest data from the Australian Bureau of Statistics.New Zealand and the United States were the second and third most visited places by Australians, while the UK, Singapore, India, Fiji, Thailand, Italy, and Vietnam rounded out the top 10.

India and Vietnam are the only nations in that list that require Australians to secure a visa before they arrive.