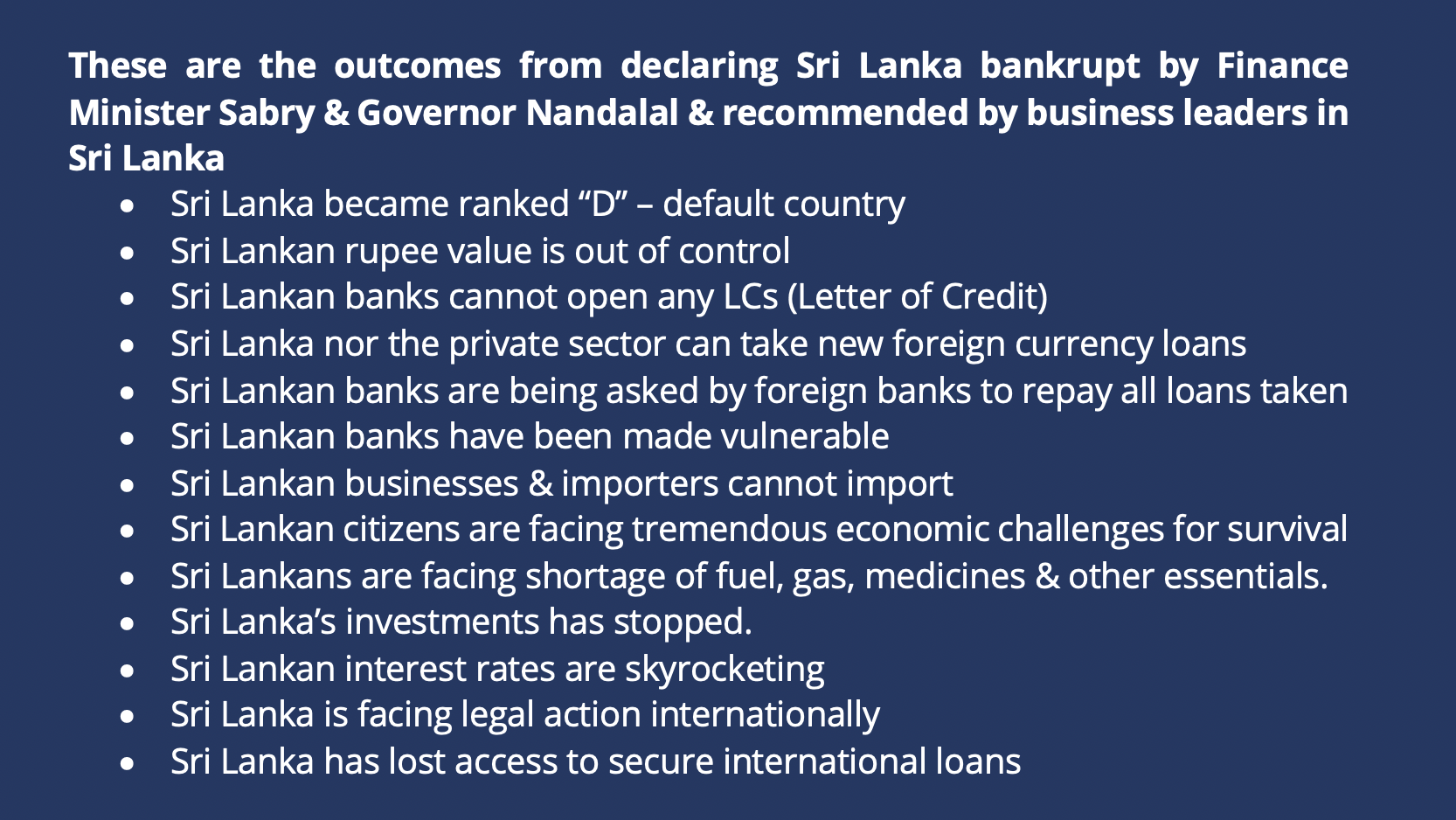 Sri Lanka was always sitting on a time bomb. Our expenses were higher than our income/revenues, our imports were higher than our exports, we were living a superficial life on loans, taking more loans to settle loans and even loans to continue our lifestyle – it was only a matter of time that the bomb would explode. Confounding matters were several internal and global calamities – covid, global fuel crisis from Ukraine war, loss of revenues that Sri Lanka had been reliant on. The situation was well known to experts planning policy, advising governments and the top echelons of society. Now that we know the consequences of defaulting and free floating the rupee as well as the international legal cases against Sri Lanka – we have every right to question every “expert” who prescribed these as their expert recommendation for Sri Lanka and citizens have every right to hold them equally accountable for the current plight. The situation has been made worse without dealing with the economic crisis but by creating a political crisis leading to double jeopardy for the nation.

The present Governor – has been with not only Sri Lanka’s Central Bank but was a Director of the IMF as well & had been on every top expert Committee in the CBSL. He too should have known the adverse impact of defaulting debt repayment. 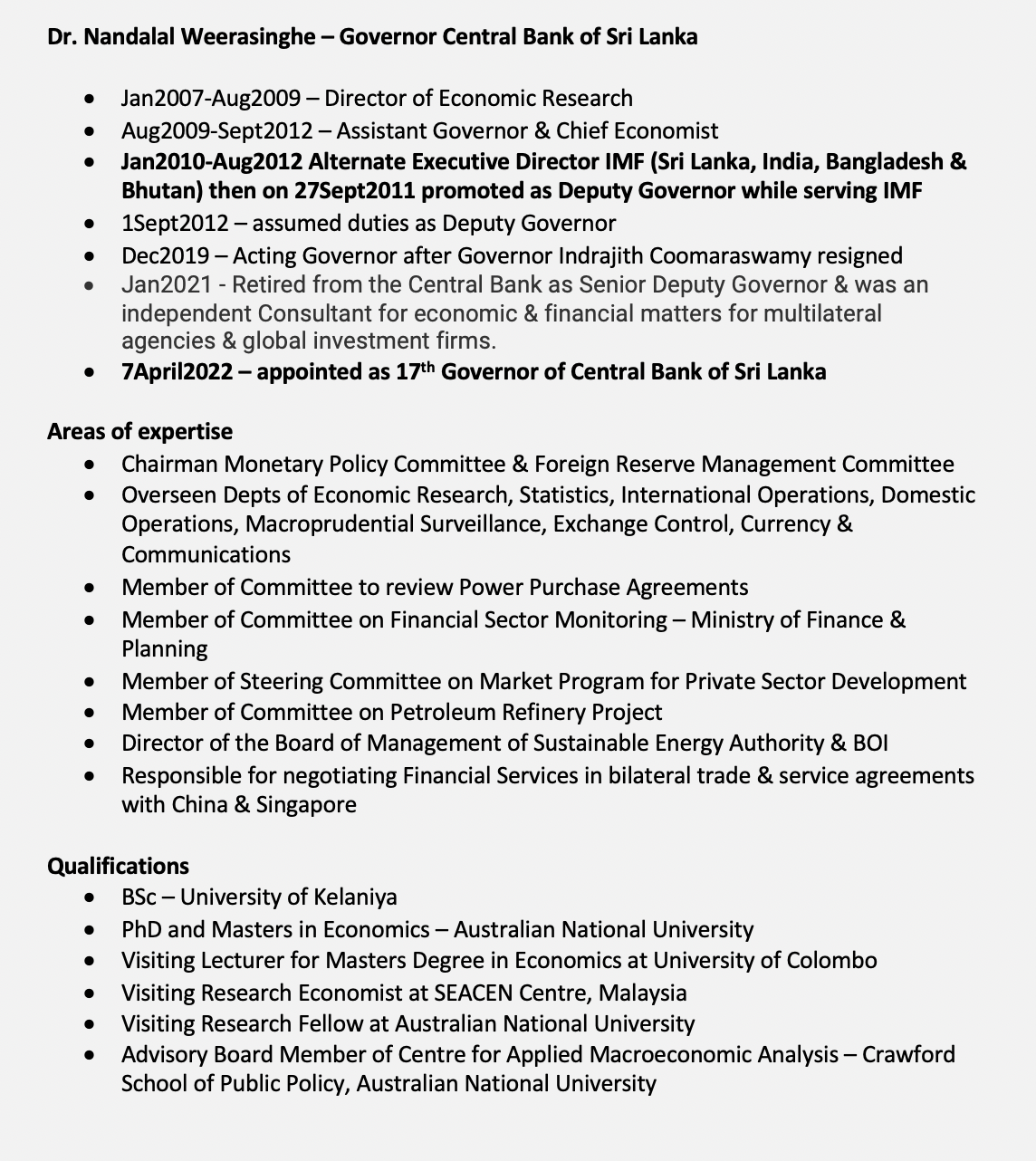 a pusswedilla following the outcome of defaulting.

Then there are the business and think tanks experts that prescribed to default repayment:

Note how all are justifying defaulting payment of loans claiming to save the money to purchase money for essentials. This is a layman’s answer and not one expected of experts knowing the above repercussions Sri Lanka has had to face as a result of non-payment. 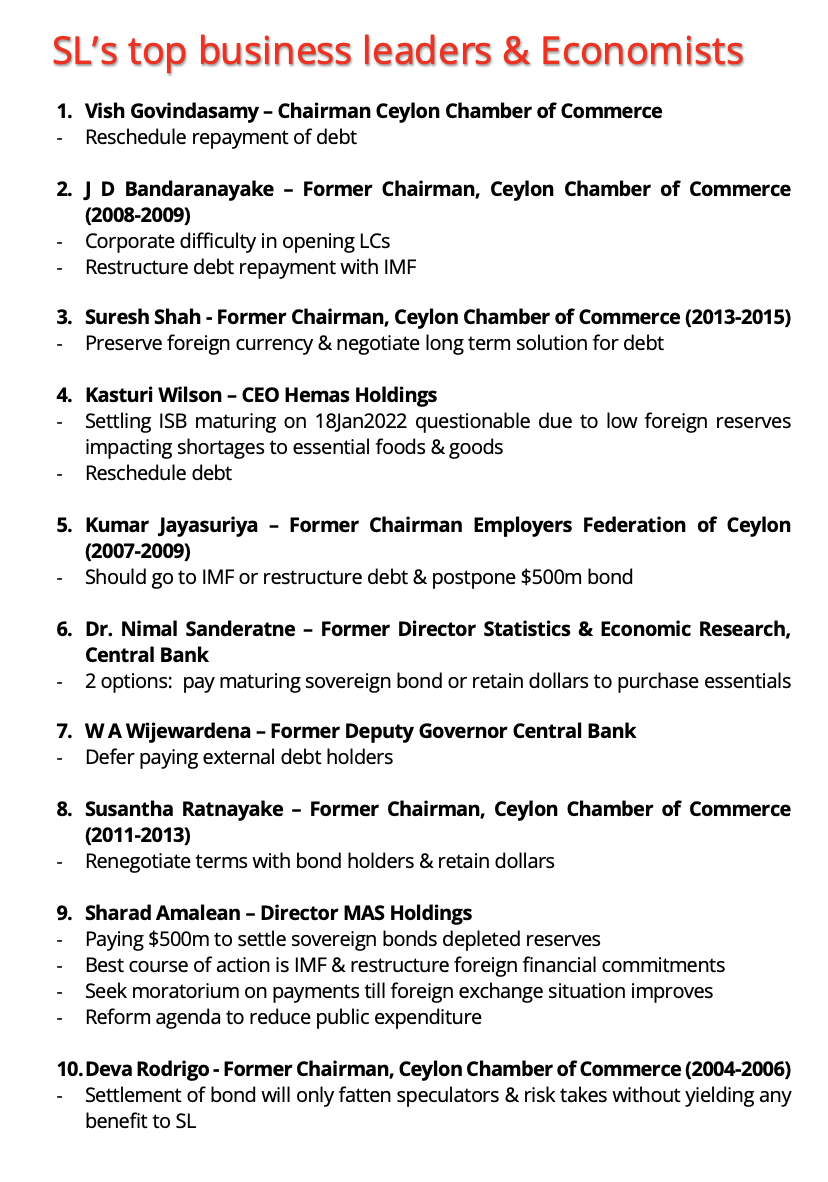 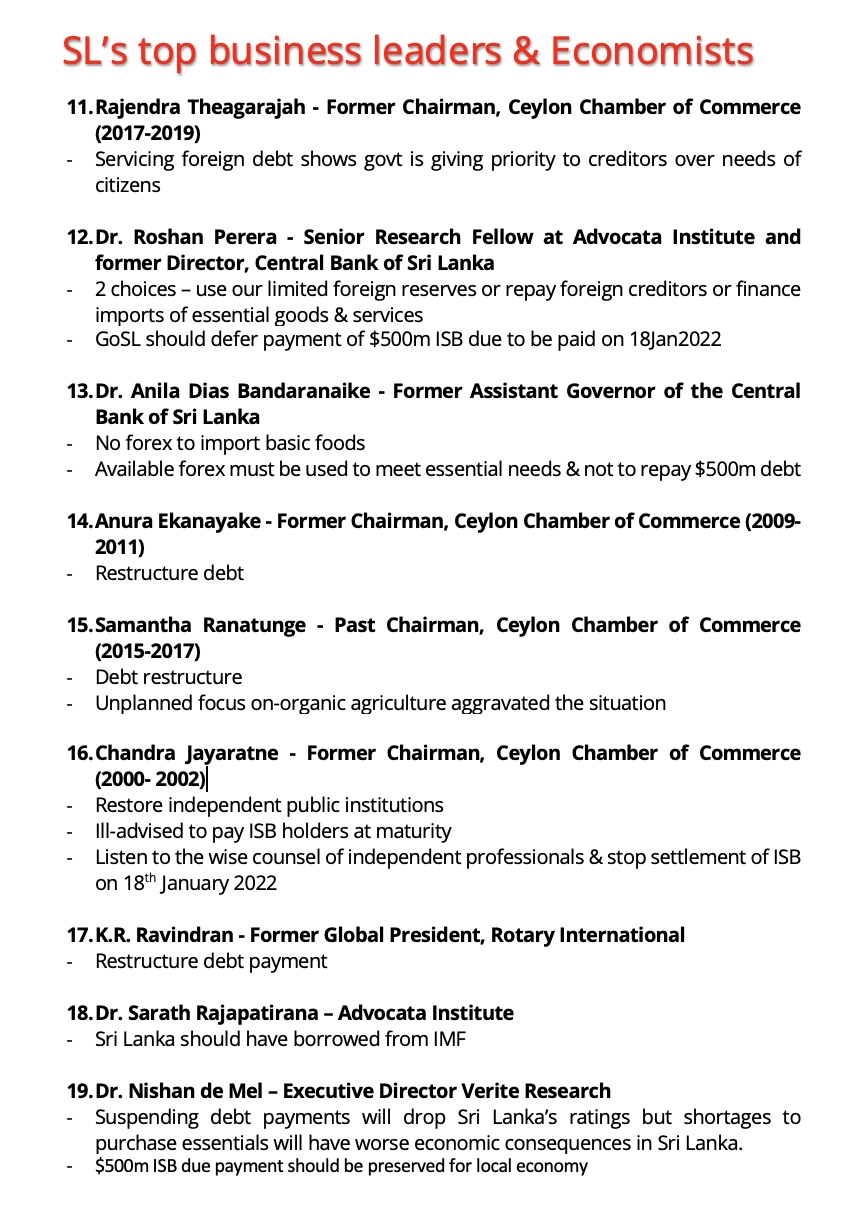 What was the issue regarding honoring repayment of loans taken?

From 2015 to 2019 – 5billon worth international sovereign bonds had been issued by the Central Bank of SL agreeing to pay at high a interest rate of 7.85%

At the end of Rajapakse term in early January 2015 Sri Lanka’s foreign reserves were $8.2b & ISB outstanding were $5b & net reserves were a positive $3.2b

By the end of 2019 Indrajit Coomaraswamy’s term as Governor, reserves were $7.6b & ISB outstanding were $15b & net reserves were a negative $7.4b

More importantly, why couldn’t they have renegotiated its payment.

It is absolutely shocking that these 2 put Sri Lanka on bankruptcy status simply for $78m non-payment while the business experts of Sri Lanka also nodded approval!

Had Sri Lanka taken the advice of these experts, Sri Lanka would have been in a pickle in January2022 itself.

Leading the political crisis as usual was the JVP openly calling for street riots by People.

Sumanthiran & EranW led the onslaught against repayment of debt loans (Jan2022) Sumanthiran was the Chairman of the Parliamentary Committee on Public Finance.

https://www.ft.lk/front-page/All-borrowings-used-to-repay-debt–Eran/44-680288 – all these are well known ‘economists’ and bankers — so when people like Eran Wickremaratne too promotes it — we are baffled as to whether these are ‘experts’ in their realms of expertise

In the context of what Sri Lanka is facing as a result of defaulting, we have to question these calls for non-payment!

Was part of the crisis to leave no option but to go to IMF?

https://island.lk/gammanpila-favours-deal-with-imf-says-most-ministers-like-minded/ Udaya Gammanpila in Feb2022 declared  “I have expressed my view that we should go to the IMF. Now most of the cabinet ministers are for an IMF deal,”

Harsha de Silva too was a heavy campaigner of going to IMF.

A pre-requisite to IMF program was to agree to a rate hike and a float of currency.

It was alleged that the CBSL was printing money at a rate prior to April 2022 but the amount of money currently being printed exceeds all previous amounts.

Was the plan to make the nation & people suffer as it left no choice for Sri Lanka?

Was this choice already kept lined up with their “wish list” in exchange for aid?

Was this why faces were quickly changed?

Whose decision was it to float the rupee? A collective decision by CBSL top management

Whose decision was it to default on repayment? Sabry-Nandalal & a coterie of 19 top businessmen/women

If Sri Lanka had not honored repayment as advised by top business leaders, economists, politicians and even former Central Bank heads – Sri Lanka would have faced being sued by bondholders much earlier than the case currently filed against Sri Lanka in Jun2022 by Hamilton Reserve Bank Ltd for full payment of default on $1billion at 5.87% interest due on 25 July 2022.

It is also baffling why Sabry-Nandalal defaulted on the $78m repayment due on 12 April 2022 when China had assured to support with $1b in cash & $1.5b in trade finance over and above the support extended by India.

All these “experts” have landed Sri Lanka in this crisis status. People should evaluate their actions against what the People are having to face.