Colombo, Sri Lanka – “We have seen people fight for food at our meal drives, it is very difficult to watch”, the co-founder of a charity organisation which provides regular meals to the poor in the country, tells Al Jazeera.

“Parents from the schools we provide meals to have asked us to increase the number of meals provided during the week as the children don’t get proper meals when they are at home during the weekend”, Community Meal Share Trust’s Nadeeka Jayasinghe says.

On Thursday, Sri Lanka and the International Monetary Fund (IMF) reached a staff-level agreement on a 48-month, $2.9bn Extended Fund Facility which will also help it secure short-term funds from other donors. But, even as the country has taken the first steps in getting financial aid from the IMF, the day when residents can resume a normal life is still not in sight.

A recent assessment by the World Food Programme Sri Lanka found that nearly 30 percent of the country’s 22 million population were now food insecure, with one in every four people regularly skipping meals to be able to afford to eat. This is the plight of many poor and ‘newly poor’ Sri Lankans who have been battered by high inflation rates, shortages, and job and income losses.

“The data seems to suggest that by the end of the year, half the population could slip below the new poverty line,” Indrajit Coomaraswamy, a former governor of the Sri Lanka Central Bank, told Indian news portal The Wire in July.

Inflation at the end of July was measured at 66.7 percent while national food inflation hit a whopping 82.5 percent in the same period. The government recently approved electricity tariff hikes, as the state-owned Ceylon Electricity Board faces increased costs of power generation amid severe debt levels.

Jayasinghe began her charity organisation in March this year after noticing that many urban communities were struggling to meet their food requirements due to rising prices and shortages in cooking gas. While the Trust has managed to expand its coverage thanks to generous international and local donors, the cost of supplying and transporting food keeps increasing and the cost per meal has shot up from 250 Sri Lankan rupees ($0.68) to up to 350 Sri Lankan rupees ($0.95) over the last four to five months.

While the government has doubled its allocation for meals for students to 60 Sri Lankan rupees ($0.16) per meal, “it is impossible to provide a nutritious meal even for that price. An egg alone costs 50-60 rupees”, she said. Schools are not the only ones struggling, and Jayasinghe also gets requests from major state hospitals and maternity clinics to provide protein-rich food like eggs and yogurt to patients. 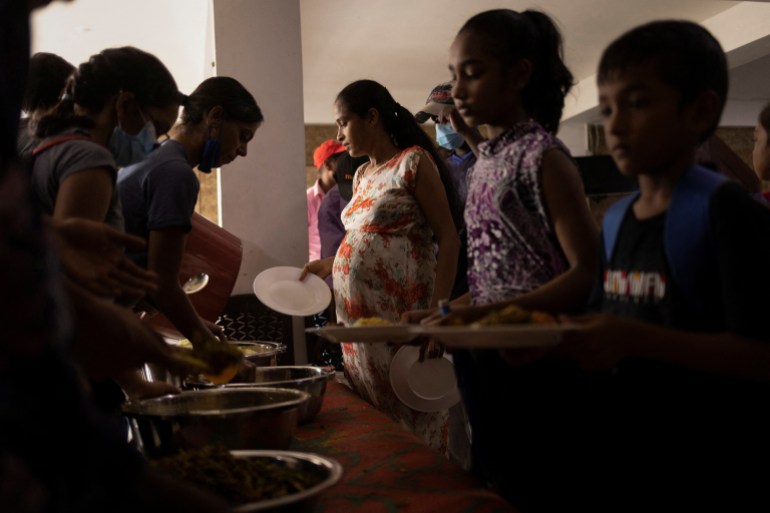 Many urban communities are struggling to pay for food and are relying on community kitchens [File: Adnan Abidi/Reuters] Import bans, price caps and quotas

The government has introduced a spate of new measures to try to manage the prices and shortages of goods in the country, including rationing, import bans and price caps.

There is currently a quota-based rationing system in place for fuel, where each registered vehicle is allocated a weekly fuel allowance depending on the type of vehicle. That, however, has left at a loss many people who depend on a continuous supply of fuel for their business.

For instance, a cab driver that Al Jazeera spoke with recently said that his weekly income has fallen from 30,000 rupees ($82) to 5,000 rupees ($14) because the fuel quota restricts how much he can drive.  The man, who did not give his name, says his family now eats just two meals a day to manage costs.

Last week in an attempt to curb foreign currency outflows, the government indefinitely banned the import of 300 items, including dairy products and electronic server equipment.

“They are trying to manage the trade balance without getting any external credit lines anymore,” Anushka Wijesinha, an economist in Colombo and co-founder of the Centre for a Smart Future, told Al Jazeera. “It’s not unusual to have such restrictions for a limited period — other countries also do it to guard against balance of payment issues.”

His worry, Wijesinha said, is that these recent policy actions can become entrenched. “There isn’t a sensible path out of it, and sometimes it becomes de facto industrial policy and misplaced import substitution. Since the onset of COVID in March 2020, we’ve had import restrictions of some form or other. What’s the plan to sunset these?” he said.

Price caps have recently been imposed on eggs in a bid to reduce prices for consumers; poultry and egg farmers have spoken out against this decision.

“The cost of producing an egg is now approximately 50 rupees [$0.14], which is above the maximum retail price of 43 rupees [$0.12],” said Amjad Athas, a small-scale egg farmer in the Puttalam district in northwest Sri Lanka. “We are not trying to make massive profits, we are struggling to even break even at this point.”

For instance, feed costs have tripled and the quality of feed available now has depleted a lot, he pointed out. “American soya is an essential ingredient to manage the protein balance of the hens but it is a luxury now with the exchange rate and import bans. Now the feed available is mainly rice polish and cheap ingredients, even locally produced corn is not widely available…. Medicines and vitamins have also skyrocketed in prices and are not widely available,” he said.

Amjad, who runs the farm with his brother, says they and many other small-scale farms they know are considering shutting down as they simply cannot keep up with the heavy losses. “For the past one year we have not invested in new batches of birds as we don’t make any profits,” he said. 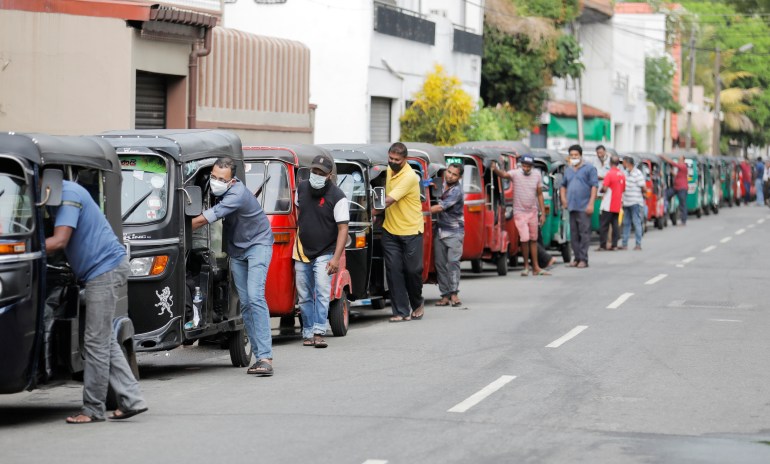 The government has imposed price caps and quotas on a range of things including fuel [File: Dinuka Liyanawatte/Reuters] The road ahead

The IMF has outlined the economic reforms that Sri Lanka needs to undertake to correct its perennial fiscal and current account deficits. Some of the steps include raising tax revenues, hiking energy prices so costs are covered, expanding social safety nets, and restoring the independence of the Central Bank and the monetary policy authority. It is also offering assistance to close policy loopholes that invite corruption.

This will also serve as a springboard for formal negotiations with the beleaguered nation’s external creditors on a suitable and sustainable debt restructuring plan.

However, the $2.9bn funding, which will be disbursed in tranches, is still at least four to six months away and contingent upon Sri Lanka finalising – and getting IMF approval for – its debt restructuring plan and reform package.

While that package is a drop in the ocean of Sri Lanka’s needs and will provide only a “small respite”, having the plan in place, and ensuring the government sticks to it, will help catalyse funds from multilateral institutions “which can be used to provide relief to vulnerable groups,” Wijesinha said.

Several multilateral organisations have already stepped in. The Asian Development Bank, for instance, announced earlier this week that it will repurpose $200m of financing to provide cash grants and food vouchers for the next three months.

“Support in the short term is very urgent to avert a humanitarian crisis,” Peter Breuer, head of the IMF mission to Colombo, said in a press conference on Thursday.

But so far, those are still minuscule amounts and a return to a pre-pandemic normal is still a far-off goal. Nevertheless, Jayasinghe, who runs the charity providing food to the poor, is keeping her fingers crossed that this financing will provide “much-required relief” for the school children and the vulnerable communities her organisation has been trying to feed.