Win sees England through to the semis, while hosts and defending champions Australia are knocked out.

England’s Ben Stokes kept his nerve to lead his team into the Twenty20 World Cup semi-finals with a closely fought four-wicket win over Sri Lanka, demolishing the hopes of defending champions Australia whose title defence is now over.

Stokes hit an unbeaten 42 in a game England needed to win to make the last-four from Group 1 alongside already qualified New Zealand.

They got the win in a nail-biting finish with two balls to spare. If they had lost, hosts Australia would have gone through instead.

“It was a tight game. It happens in T20 cricket,” said Player of the Match Adil Rashid. “They bowled well and created pressure but Stokesy played magnificent so we got over the line which is a good thing.”

Sri Lanka looked on track for a big total when they reached 80-2 after 10 overs, but the aggressive Pathum Nissanka was out for 67 and they crumbled to 141-8 with bowler Mark Wood taking 3-26.

In reply, England raced to 75 without loss and looked on track for an easy win. But they collapsed to 111-5 under pressure from the Sri Lankan spin attack and it went to the wire.

The victory was not enough to dethrone New Zealand at the top of the table, with England having to settle for second. 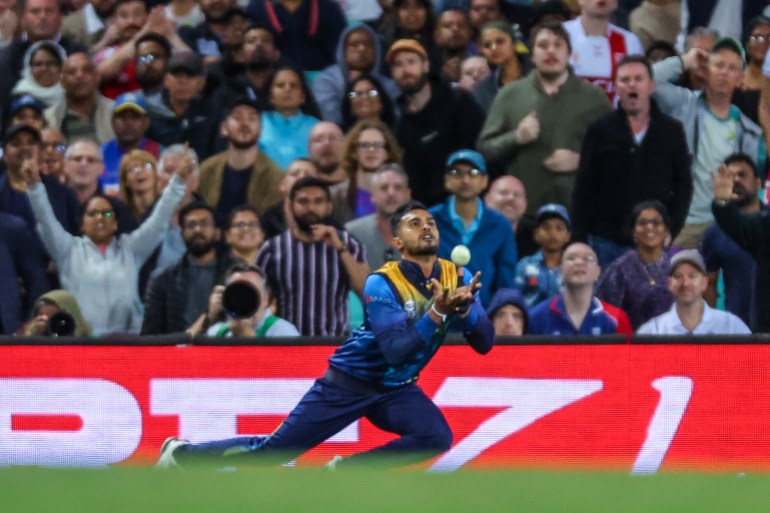 Sri Lanka’s defeat ended Australia’s stuttering tournament, with their title defence never recovering after losing heavily to New Zealand on the opening day then having to share points with England due to rain.

“It was an amazing fight but still we could have done better in the batting part,” said Sri Lanka captain Dasun Shanaka. “Even the English batters struggled in the latter part … When we go home, we have to certainly polish up the areas where we didn’t do well.”