President Ranil Wickremesinghe’s trip last Sunday to Jaffna in Sri Lanka’s north during the Thai Pongal religious festival, provoked a protest by hundreds of Tamils. Demonstrators chanted slogans including “Give back our missing people,”“Release all Tamil political prisoners” and “Return military-occupied land.” 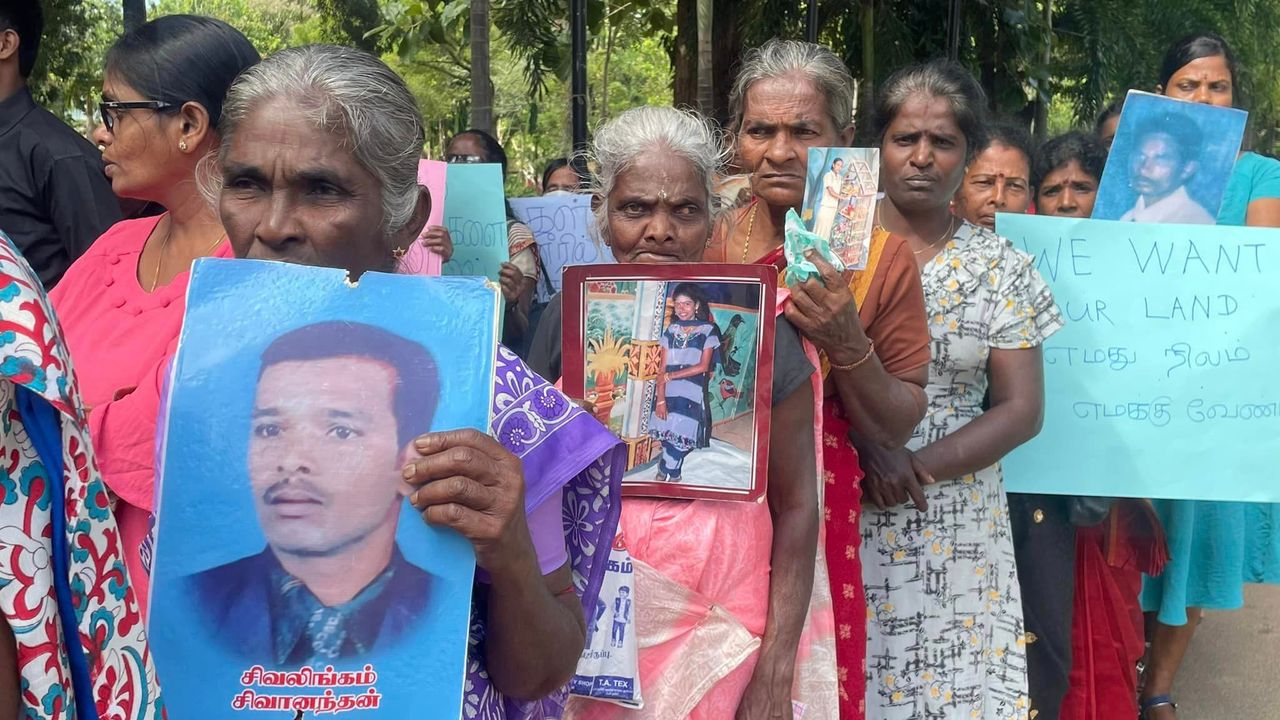 Relatives of the "disappeared" preparing to protest during President Wickremesinghe's visit to Jaffna on 15 January 2023. [Photo by Mayurapriyan]

Wickremesinghe’s visit during the Hindu festival, which is celebrated by Tamils in India, Sri Lanka and Tamil communities around the world, was a crude and cynical attempt to feign concern about the democratic and social rights of Sri Lanka’s Tamil minority.

Wickremesinghe “concerns” are part of his ongoing attempts to secure the support of the Tamil elite parties to impose the country’s financial crisis via the International Monetary Fund austerity measures onto the working class and the rural masses.

The “disappeared” or “missing people” are Tamil youth who were abducted by, or surrendered to, the military during Colombo’s 26-year bloody war against the separatist Liberation Tigers of Tamil Eelam (LTTE). According to the UN, around 40,000 Tamil civilians were killed by the army during the final months of the war which ended in May 2009.

Sri Lankan Tamils are outraged over Wickremesinghe’s announcement last month that his government would issue death certificates for the “missing” and pay 100,000 rupees ($US270) compensation to each family who lost loved ones.

For those who were killed by the military and its death squads, it provides no justice to their families. For any who might be still alive, it means their continued incarceration and torture in unknown locations.

Thirteen years after the end of the war, dozens of Tamil political prisoners are known to be still languishing in jail and thousands of acres in the North are still held by the Sri Lankan military which continues to rule the area.

On Sunday Wickremesinghe’s plane landed at Palaly Airport, where he was greeted by Eelam People’s Democratic Party (EPDP) leader Douglas Devanada, who is a minister in the Colombo government. The president travelled under heavy police guard, including its Special Task Force (STF) and commandos, to venerate the chief monk at Sri Naga Viharaya Buddhist temple. He met with Jaffna Bishop Dr. Justin Gnanapragasam then went to the Thai Pongal celebrations at Nallur Kovil in Jaffna.

Family members of the “disappeared” travelled from Mullaithivu, Kilinochchi and Vavuniya, prior to the protests, defying state forces who attempted to block them. They later converged with students at Jaffna University and, numbering about 400, marched towards Nallur Kovil where Wickremesinghe was attending the Thai Pongal religious events. STF officers and the police erected barricades to try to block the marchers. Protestors removed the barricades and attempted to continue their march but were violently attacked with police with water cannons and dispersed.

Following the Nallur Kovil event, Wickremesinghe went to the Jaffna Durga Hall where he addressed government supporters. He told the audience that he hoped “to fully implement the 13th Amendment to the constitution.” 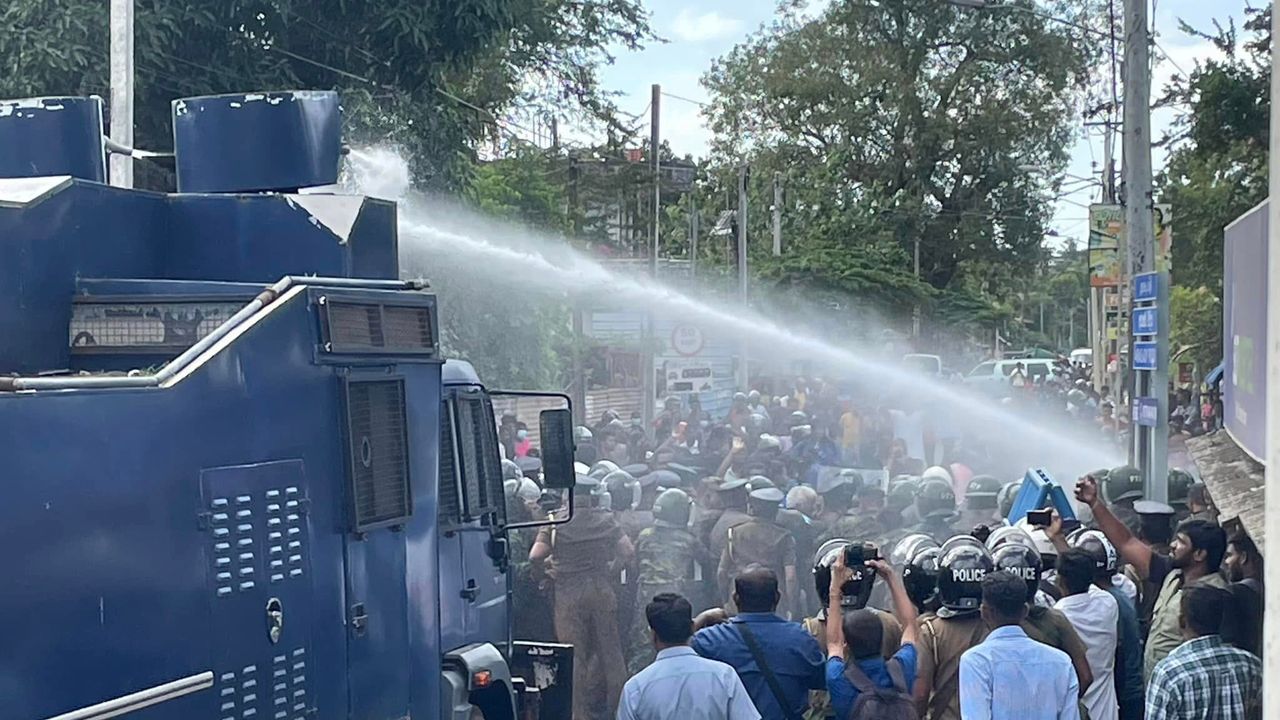 Police use water cannon against protesting relatives of the "disappeared" at Arasadi Junction in Jaffna on 15 January 2023. [Photo by Tamilnews1-Mayurapriyan]

Next month, he said, the government would announce new “reconciliation” measures and insisted that he had appealed to all parliamentary party leaders to “work to unite this country and restore harmony.”

On December 13, Wickremesinghe held an all-party conference, which included the Tamil National Alliance and the Tamil People’s National Forum, where he declared his readiness to fully implement the 13th Amendment. The amendment was part of the 1987 July Indo-Lanka Accord which saw Indian military forces sent into northern Sri Lanka to disarm the LTTE and suppress working-class opposition against the then government.

The 13th Amendment had nothing to do with the defence of the democratic and political rights of the oppressed Tamil people but was to provide certain powers to the Tamil elite in the merged North and East provinces. The Tamil parties are insisting on full implementation of the amendment, granting police and land powers to the merged provincial councils.

Successive Colombo governments, based on Sinhala communal politics, were hostile to granting these powers. The Supreme Court, acting on an application by the Sinhala chauvinist Janatha Vimukthi Peramuna (JVP), ruled that the merged northeast council was unlawful and it was split in two in 2007.

Wickremesinghe is taking up this issue once again in order to reach a deal with a section of the Tamil bourgeoisie and privileged upper-middle class in order to prop up his politically fragile government amid widespread opposition to his austerity measures.

“As we all have to live in one country, we must return to the Sri Lankan identity and build the economy that late Mr. D. S. Senanayake [Sri Lanka’s first prime minister and United National Party (UNP) leader] created 75 years ago,” Wickremesinghe told the Durga Hall audience. “Thirty years of war and insurgency,” he added, has seen us “divided by divisive, racist, sectarian and bankrupt politics.”

Wickremesinghe has turned history upside down. Senanayake’s first government in 1948 abolished the citizenship rights of Tamil-speaking plantation workers and initiated vicious communal discrimination to divide the working class along ethnic lines. These communal provocations culminated in 1983 with the war against the LTTE, under the then UNP regime. Wickremesinghe, who was a minister of that UNP government, shares direct responsibility for the bloody atrocities unleashed against Sri Lankan Tamils. 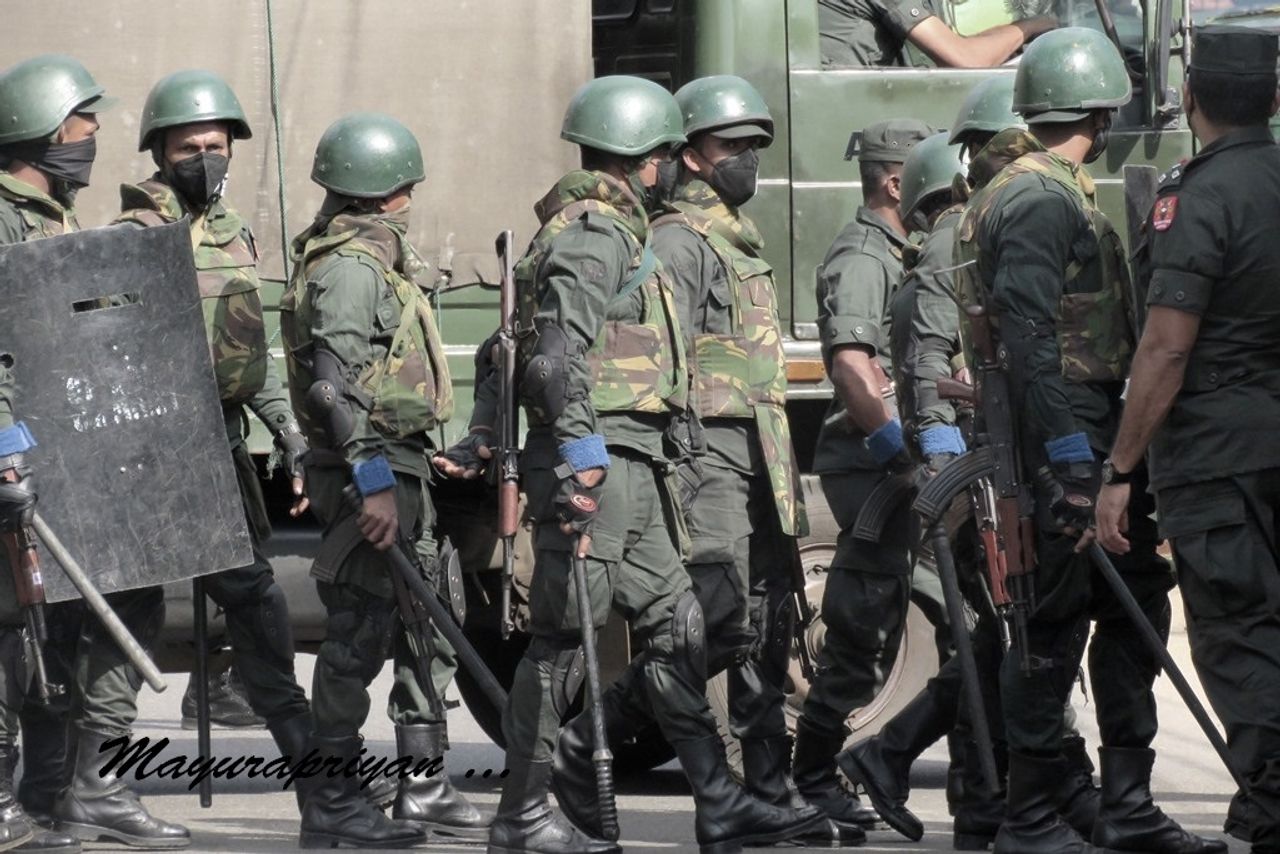 Last Sunday’s protest against President Wickremesinghe is not an isolated event. It is an expression of the deep-going nationwide opposition to the suppression of democratic rights and the impact of the economic crisis that has devastated lives of workers and the poor across the island.

The unity of the working class and the poor across ethnic and religious lines was powerfully seen when millions of people rose up against the government between last April and July compelling then President Gotabhaya Rajapakse to flee the country and resign.

Last Sunday’s protest, which was organised by the Missing Persons Organisation and the Jaffna University Students Union, was based on Tamil nationalism. The appeals to Colombo are aimed at diverting the genuine outrage over the war crimes and ongoing state discrimination against the Tamil masses into securing a better deal for the Tamil elite.

The Tamil political parties, moreover, are appealing to US imperialism and India to assist in securing a power-sharing deal for the Tamil elite. Washington and New Delhi, which fully supported Colombo’s communalist war against the LTTE, have no genuine concern about the rights of Tamils or, for that matter, other oppressed minorities elsewhere in the world. Their “concern” is to ensure Sri Lanka is maintained and expanded as a vital strategic military location in their war preparations against China.

The ending of Tamil and other racial and religious discrimination in Sri Lanka can only be won through a united struggle of the working class and rallying the rural poor—Sinhala, Tamil and Muslim alike—to establish a United Socialist Republic of Sri Lanka and Eelam as part of the broader struggle for socialism in South Asia and internationally. This is the perspective that the Socialist Equality Party fights for.

The World Socialist Web Site is the voice of the working class and the leadership of the international socialist movement. We rely entirely on the support of our readers. Please donate today!Related TopicsFind out more about these topics:
What’s your Reaction?
+1
0
+1
0
+1
0
+1
0
+1
0
+1
0
+1
0
Facebook Twitter Email
written by "Tamil,LTTE,Sri Lanka" - Google News Tue Jan 17, 4:23 am Source