Home » Militarisation in Sri Lanka Part 1: The Military and the Economy

Militarisation in Sri Lanka Part 1: The Military and the Economy 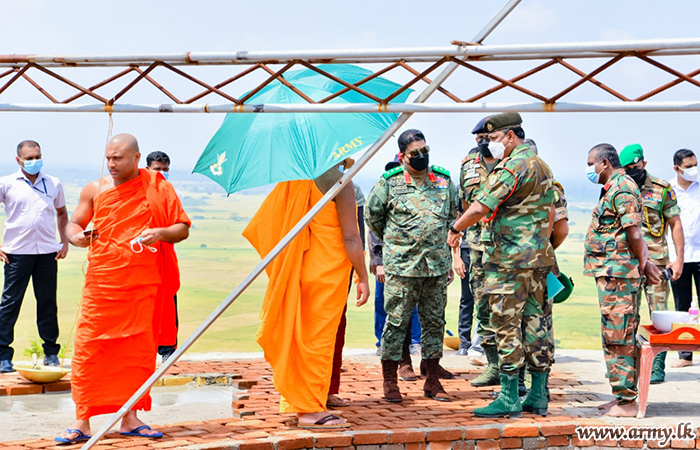 Sri Lanka Campaign would like to thank Risa Thevakumaran for her hard work researching for and designing the infographics used in this article.

In recent months, Sri Lanka has been rocked by an economic, social, and political crisis. Whilst the situation on the ground has been in constant flux, the security forces have exploited the crisis to entrench the central role they play in the nation’s politics, further destabilising the situation, such as when they opened fire on fuel queues in Mullaitivu and issued threats of violent escalation. Both the police and armed forces have been at the forefront of President Ranil Wickremesinghe’s recent crackdown on peaceful demonstrations, including a brutal assault on protestors at ‘GotaGoGama’ in Colombo on 22 July.

This is not a new phenomenon in Sri Lanka, as the government has regularly employed the armed forces to quash opposition, and they have often resorted to extreme violence. During the leftist JVP uprising of 1987-9, thousands were disappeared or killed in ‘counter-insurgency’ operations, and the decades of brutal war with Tamil separatists culminated in horrific mass atrocities against civilians and surrendering LTTE cadres in early 2009.

Even in times of relative peace, the military has continued to wield an outsized influence on civilian life on the island. This is particularly true in the Northern and Eastern Provinces, which are predominantly Tamil and Muslim. The military subjects the local population to harassment, surveillance and maltreatment, with persistent reports of torture and sexual violence against Tamil civilians. Activists and journalists are regularly detained or interrogated by security forces, whilst heavily armed soldiers intimidate and threaten those seeking to remember the dead.

The Military and the Economy

In an attempt to understand Sri Lanka’s current economic crisis, some have pointed to Sri Lanka’s high military spending as one cause of the country’s financial ruin. The government’s 2022 budget, published last October, allocated 15% of state expenditure to defence, far higher than the South Asian average. This was despite Sri Lanka’s ‘unsustainable’ debt and deficit crisis, which was already seriously impacting the country’s economic wellbeing in late 2021.

Although sixteen of the army’s twenty army divisions are located in the North and East of the country as of 2020, the vast majority of the more than 300,000 military personnel in Sri Lanka are Sinhalese. Whilst the military does provide employment for some Sri Lankans, this opportunity is largely denied to local Tamils or Muslims. Indeed, the armed forces are not only a massive fiscal burden for the Sri Lankan state, but also serve to severely restrict civilian participation in the economy in military-dominated areas. This is because the armed forces operate multiple businesses across various economic sectors, including agriculture, leisure, and catering. According to a 2018 report by the South Asian Centre for Legal Studies, the military’s substantial resources, combined with a lack of oversight or proper accounting, have made it nearly impossible for local people to compete with these enterprises, distorting regional economies.

The Military and Land

Although  the military own and operate enterprises throughout the country, these are particularly concentrated in the Northern and Eastern provinces, on land controlled by the armed forces. Over several decades, significant portions of land in the North and East have been confiscated by the military, sometimes with the aid of allied paramilitary organisations. Some land has ostensibly been seized to protect natural sites, or to preserve Sri Lanka’s ‘archaeological heritage’, but much of this territory is also occupied by the army. Whilst some of this occupied land has been returned, land seizures have continued unabated. The ongoing forcible acquisition of land has displaced thousands of families and disrupted traditional agricultural activities, whilst the conversion of religious sites venerated by Hindus into Buddhist stupas – a process commonly termed ‘Sinhalisation’ – has exacerbated ethnic and religious tensions.

Read more about the seizure of disputed religious sites in our earlier blog post. 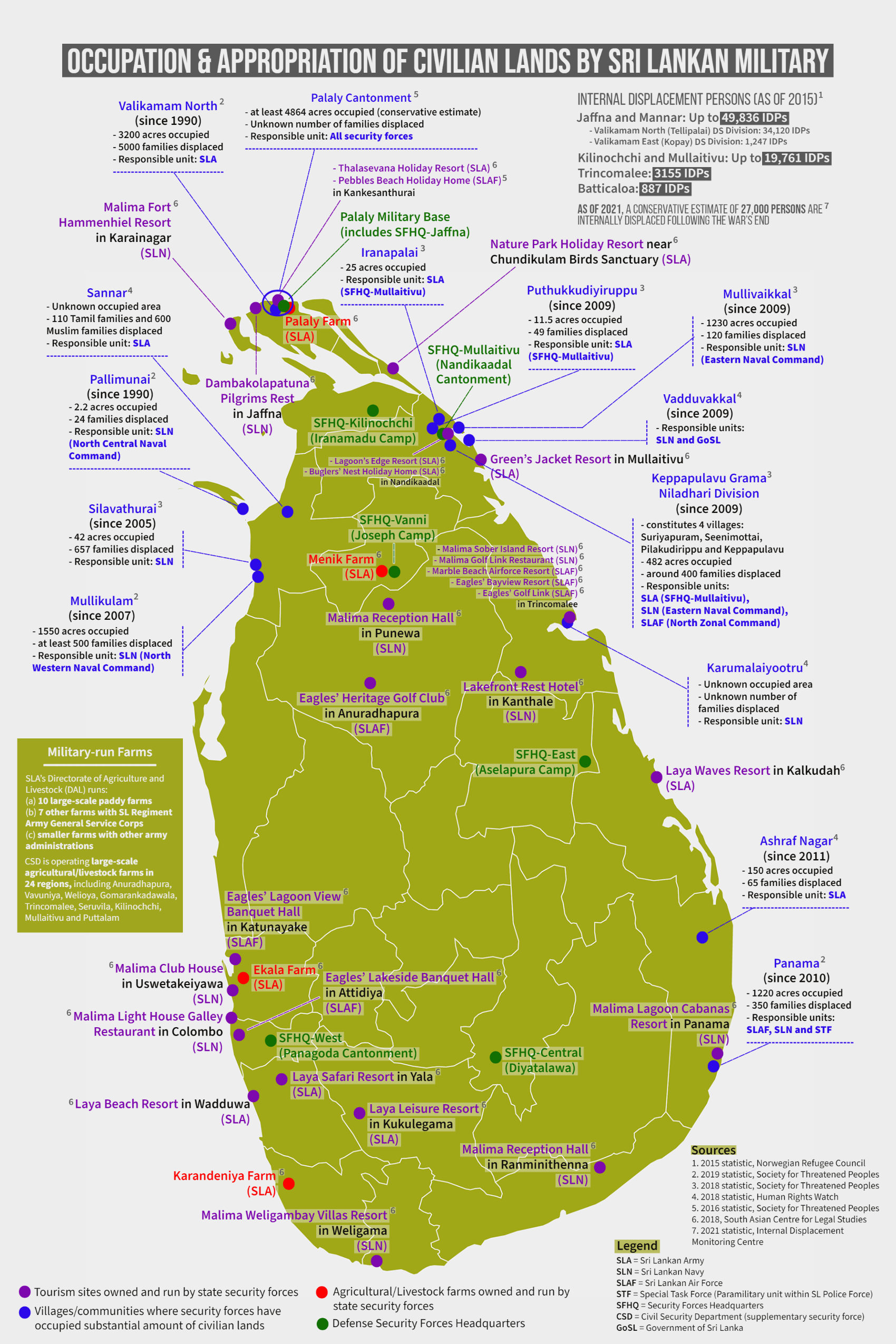 Just some of the land occupied by the Sri Lankan Armed Forces.

The military has also aided the seizure of land by various non-military agencies, including the Mahaweli Development Authority, a government ministry tasked with increasing the availability of water for irrigation in the Mahaweli river basin. The Mahaweli Authority, in collaboration with the armed forces, has used its extensive powers to continually appropriated land in Tamil- and Muslim-majority areas. The military has evicted or even massacred local residents, and the Ministry has helped relocate large numbers of Sinhalese farmers to that confiscated territory. These settlements provide important army bases and fertile recruiting grounds for the military, and in 2020, a retired Major-General was appointed Secretary to the Mahaweli Ministry, demonstrating the close relationship between the agency and the armed forces. Meanwhile, land seizures have devastated local communities and substantially changed the ethnic character of parts of the North and East in favour of the Sinhalese community, particularly in the Eastern province.

Successive Sri Lankan governments have refused to reduce the size of the military, demilitarise the country, hold commanders to account for gross human rights violations, or relinquish land seized by the armed forces and other government agencies. This failure means that it is now the responsibility of the international community to demand action, both through the UN Human Rights Council and their own bilateral relationships with the Sri Lankan government.

However, instead of applying pressure on the Sri Lankan government, representatives of foreign nations regularly meet with accused war criminals, including both military personnel and paramilitary leaders. Australia, India, Japan, the UK, the USA, and many other countries have defence relationships with Sri Lanka, providing the Sri Lankan military with materiel or engaging in joint training exercises. This engagement has served to legitimise and rehabilitate the image of the Sri Lankan armed forces without improving their record on human rights, as the military’s entrenched and systemic culture of impunity has prevented substantive change. 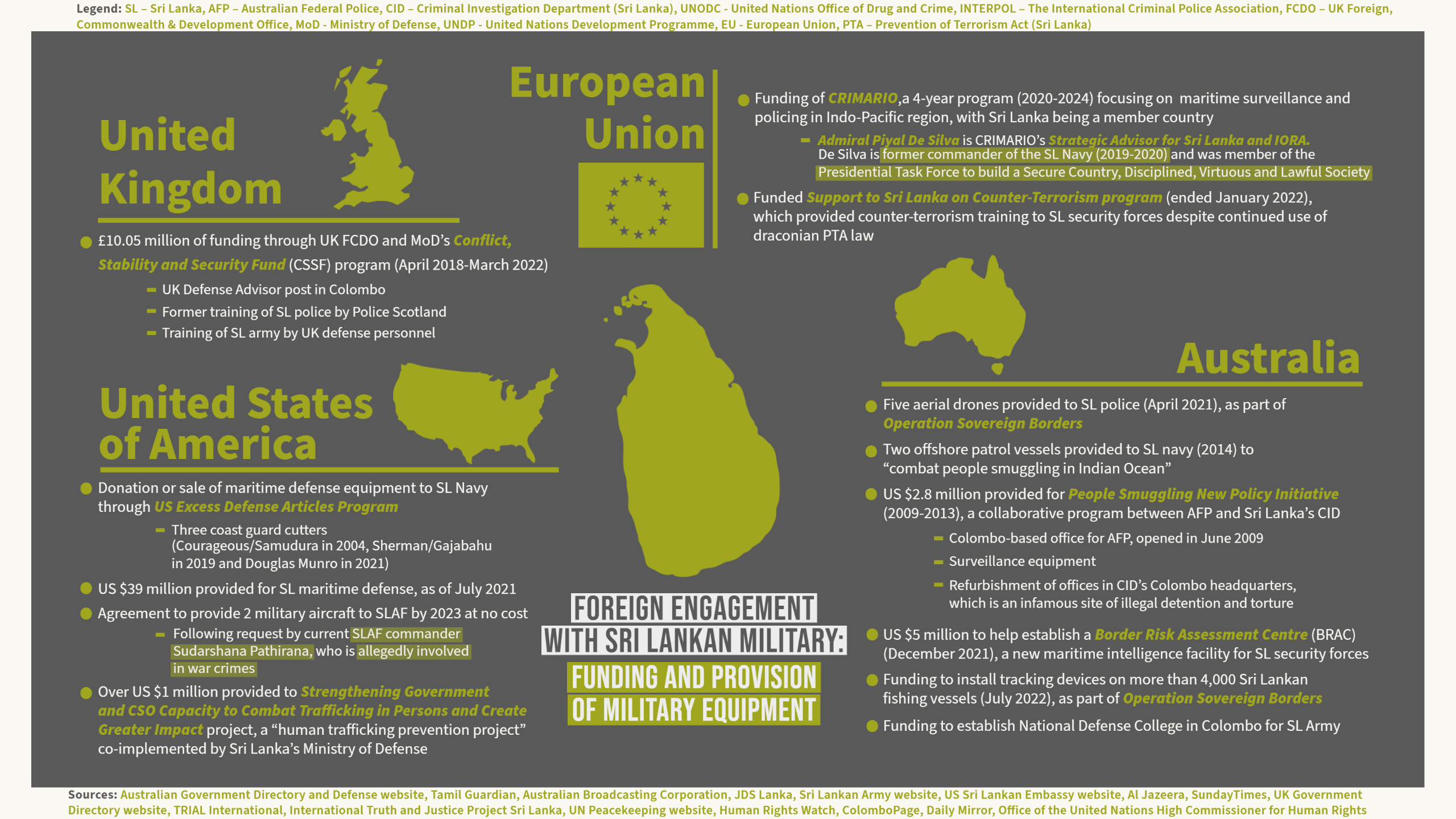 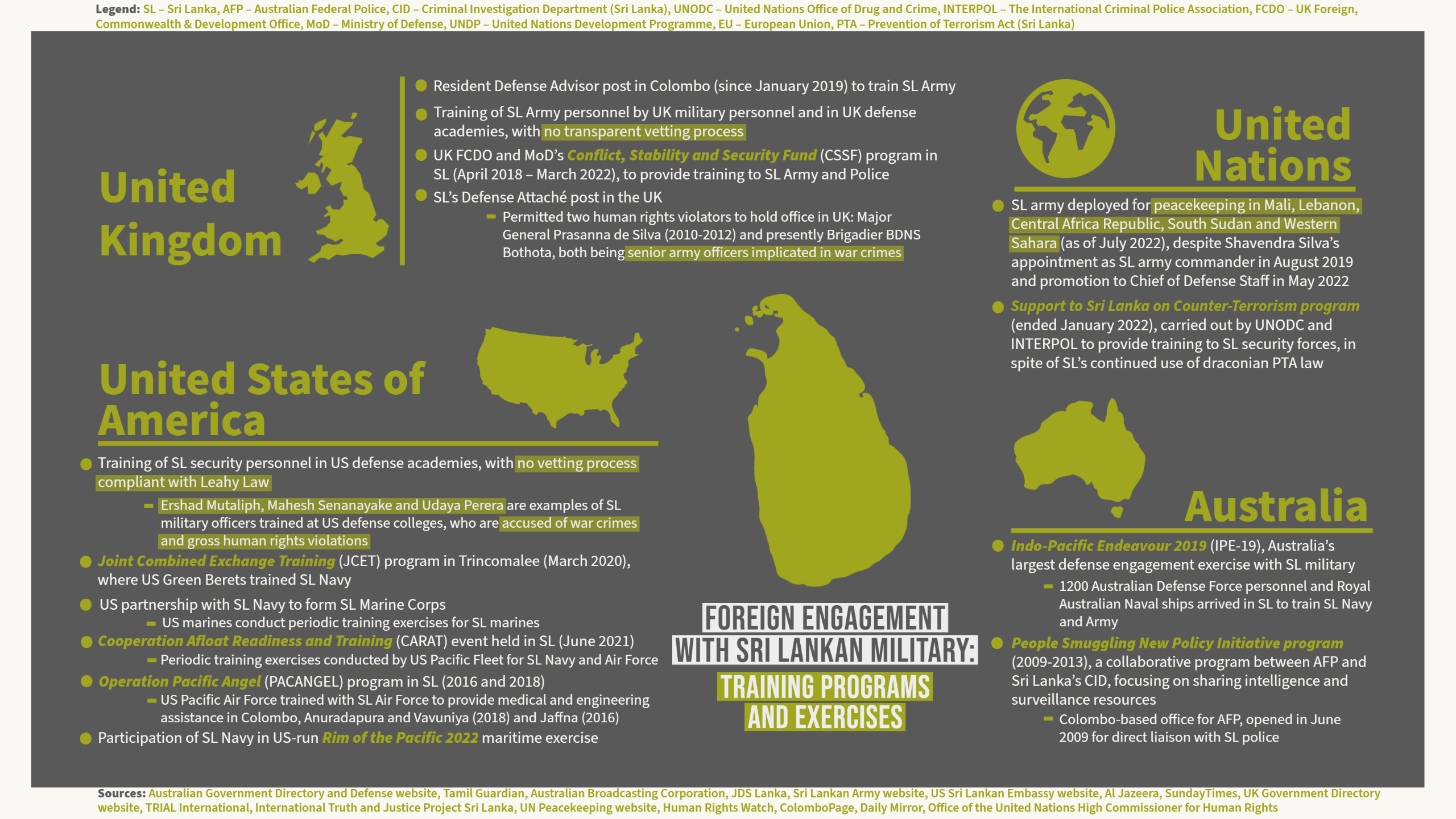 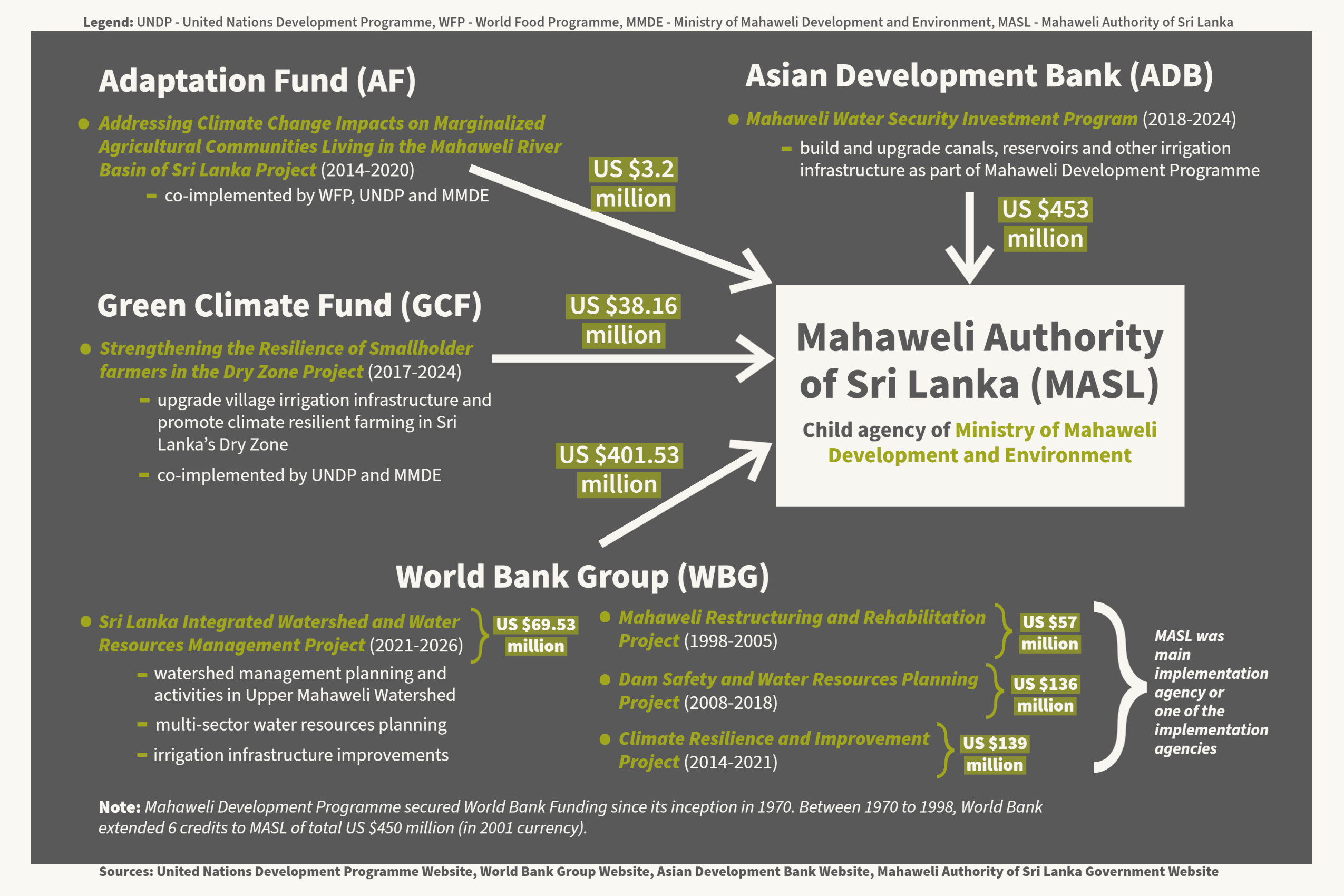 Whilst some programmes run by the military or the Mahaweli Authority might do important work, this international funding still allows these highly problematic institutions to continue their more nefarious activities. This show of international support also helps whitewash their reputations, and the military’s close relationships with international partners shields them from international accountability. To help build a lasting peace in Sri Lanka and to support the country’s struggling population, governments and multilateral institutions must divest both from the overfunded army and these heavily militarised government agencies. This money should instead be invested in more transparent, trustworthy initiatives to promote human rights, economic development, and humanitarian causes in Sri Lanka. They must also put pressure on the Sri Lankan government to demilitarise the country, substantially reduce military expenditure, and hold military officials to account for historic and ongoing violations of international law.

This is the first of a two-part blog series on militarisation in Sri Lanka. The second will focus on the military’s role during the COVID-19 pandemic.