Norwegian diplomat Erik Solheim, who was the spearhead of an international peace process in Sri Lanka which failed, says the now ousted Rajapaksa brothers had no larger vision for their country and were into doing “politics for themselves.”

Solheim, among the few foreigners who has extensively studied Sri Lanka, also feels that the leftist Janatha Vimukti Peramuna (JVP) would be a big gainer after the ouster of President Gotabaya Rajapaksa in a mass uprising on July 9.

But he said in a wide-ranging interview that it would do a lot of good for Sri Lanka if a new president who succeeds Rajapaksa links up with the Tamil National Alliance (TNA) to breach the ethnic divide in the island nation.

During the peace process, Solheim visited Sri Lanka more than 50 times and interacted widely with various players amid widespread criticism from Sinhalese hardliners and Tamil moderates that he was biased towards the Tamil Tigers.

The 67 year old has repeatedly denied the allegation, and reiterated in his interview that there could have been a peaceful settlement to the long-running conflict if only both sides had made compromises.

“I believe there was a negotiated settlement at hand. But both the Liberation Tigers of Tamil Eelam (LTTE) leader (Velupillai) Prabhakaran and the Rajapaksa government opted for war instead of peace. (It was) a huge missed opportunity for peace.”

According to him, both the LTTE and Colombo could have made compromises and established a federal state. “India is federal, it doesn’t make India weak but strong. If Delhi insisted on making all decisions for Chennai, India would also break up.”

The Norwegian politician-turned-diplomat said he interacted with the Rajapaksa brothers, primarily then President Mahinda Rajapaksa and defence secretary Gotabaya Rajapaksa, “over hundreds of hours in numerous meetings.”

“They never had a larger vision for Sri Lanka. They didn’t spend any time to consider what Sri Lanka looks like from a Tamil or Muslim perspective. Nor did they have any economic policy which could take the nation to prosperity, like for instance Singapore.”

“They are Sinhalese nationalists. But above all, they are into politics for themselves, for the family. Where else can you find an entire nation of 22 million run completely by four brothers,” Solheim said in his first interview after the July 9 storming of the President’s House forced Rajapaksa to flee.

Solheim recalled that the Rajapaksas, by militarily crushing the LTTE in May 2009, came to be seen as the saviours of the Sinhalese community, which went on to elect them with a thumping majority.

“In record short time they have wasted all support and sympathy, and the people of Sri Lanka mobilised to get rid of the family dynasty. I never anticipated it could happen so fast.” 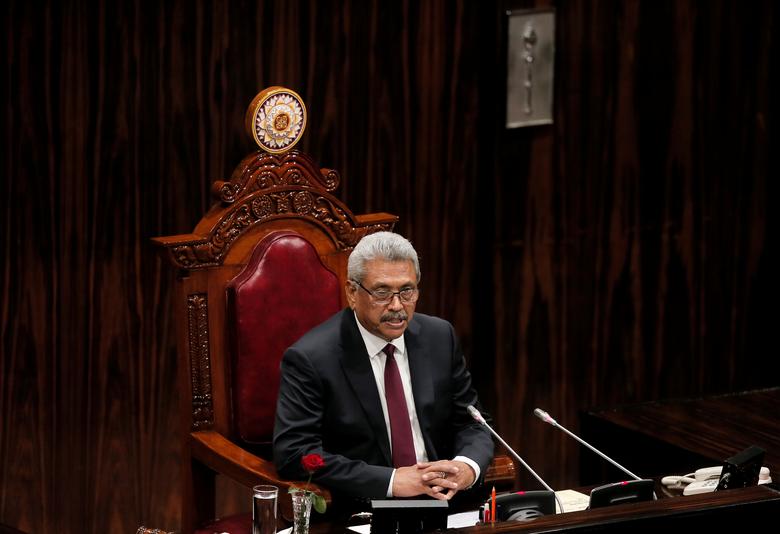 Solheim explained that while Tamils as a community may not have been as vocal as the Sinhalese in the recent anti-government protests, arising from widespread shortages of even essential commodities like food, fuel and medicines, there was a reason why the Sinhalese played the lead role in toppling the Rajapaksas.

Solheim also felt that Mahinda Rajapaksa (who resigned as Prime Minister in May this year) had a chance to rebuild a united Sri Lanka after crushing the LTTE but he frittered away the opportunity.

“If Mahinda Rajapaksa had used his hero status as war winner in 2009 to reach out to the Tamils in reconciliation, Sri Lanka would have been a very different place today.”

“Had he been as magnanimous in peace as he was effective in war, huge public spending could have been directed to infrastructure and welfare, rather than wasted on an oversized military.”

The future of Sri Lankan polity

The JVP, which carried out two bloody insurrections in Sri Lanka (in 1971 and 1987-89) but has now publicly given up on violence, is bound to gain politically now, more so since it played a key role in the anti-government protests, Solheim feels.

“It will be surprising if a left-wing party like JVP doesn’t get added votes in the next election. The JVP carries a huge stigma from the two failed revolutions and from its chauvinism during the war. But it may evolve as a serious part of a future Sri Lankan polity.

“The revolution (which overthrew the Rajapaksas) has been leaderless. So, as it stands now, the most likely winner of the next election is opposition leader Sajith Premadasa. A very positive opportunity for Sri Lanka would be if Premadasa linked up with (M.A.) Sumanthiran and (his) Tamil National Alliance (TNA) in a government which crosses the ethnic divide.”

The changes in Sri Lanka, he added, are “a historic window to sort out the underlying issue… how to meet Tamil aspirations for self-determination within one Sri Lanka.”

Norway’s minister of international development and minister of environment from 2005 to 2012, Solheim also headed the UN Environment Programme from 2016 to 2018. According to him, there were three main factors which led to the unprecedented economic breakdown in Sri Lanka.

“The sheer incompetence of the Rajapaksas in economic matters. They were never interested in economics, only in the political game. Spending more government money while cutting taxes is a recipe for disaster everywhere.” 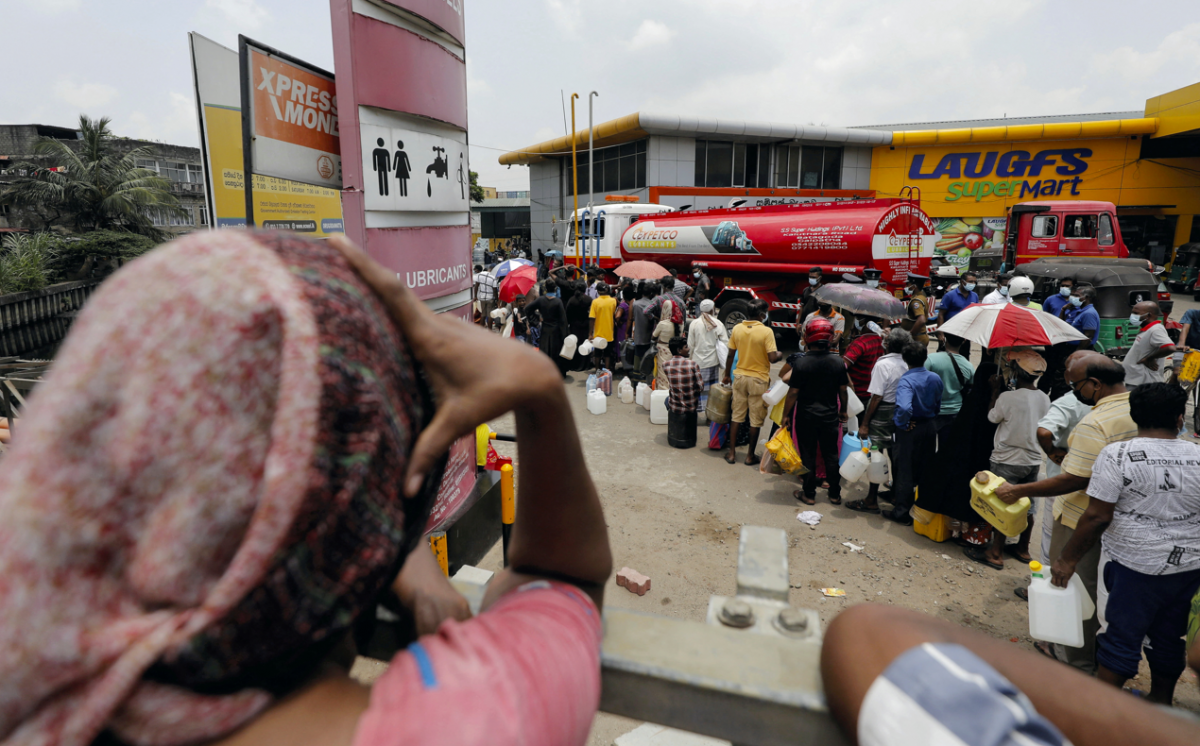 People stand in a long queue to buy kerosene oil for kerosene cookers amid a shortage of domestic gas due to country’s economic crisis, at a fuel station in Colombo, Sri Lanka March 21, 2022. REUTERS/Dinuka Liyanawatte

“Secondly, Sri Lanka has been incredibly unlucky. The COVID-19 hit Sri Lanka harder than nearly any other country. The number one currency earner, tourism, collapsed. Remittances from Lankans working in the Gulf dried up.”

“Thirdly, the Tamil issue is at the root of everything. Since the Rajapaksas were never interested in finding a solution with the Tamils, they needed to keep an outsized military. That is a big burden for a developing country like Sri Lanka.”

Solheim was asked the reasons the West did not seem to have responded in a major way to keep afloat Sri Lanka amid the economic collapse.

“There was no love between the Rajapaksas and the West, even less with India. Since they never listened to advice from India or the West on how to bridge the ethnic communities or how to create an economic policy for growth, why should foreigners rescue them?”

He added: “It will be much easier to appeal to both the West and India for help, when the Rajapaksas are gone. But at the end, Sri Lanka will have to rescue itself. Rapid economic progress is a fundamentally domestic process as we have seen in fast-growing economies like Singapore, Korea, Vietnam and China. Foreigners can help, Sri Lankans must lead.”

Solheim says he remains in a touch “with a lot of old friends from Sri Lanka” and follows the events from day to day. But he has not been to Sri Lanka since 2006, when the LTTE resumed its separatist campaign that ended in its disastrous military rout. “I would love to go back as a tourist or to help with green developments. It is a fantastic and beautiful island with so many amazing people. I stand ready to help Sri Lanka in any way possible.”