Rajapaksa fled to Singapore on July 14 following widespread demonstrations over Sri Lanka’s worst economic crisis in seven decades, and days after thousands of protesters stormed the president’s official residence and office over acute shortages of food, fuel and medicine.

He then resigned from the presidency, becoming the first Sri Lankan head of state to quit mid-term.

Rajapaksa is expected to leave Singapore and head to Thailand’s capital Bangkok on Thursday, the Reuters news agency reported, citing two sources who asked not to be named. Sri Lanka’s foreign ministry did not immediately respond to requests for comment.

There was no immediate comment from the Sri Lankan embassy in Singapore, which had supported Rajapaksa’s attempt to stay longer in the city-state.

Tanee Sangrat, a Thai foreign ministry spokesman, said Rajapaksa holds a diplomatic passport that allows him entry into the country for 90 days. He did not say when Rajapaksa intended to visit.

“The entry to Thailand by the former president of Sri Lanka is for a temporary stay,” Sangrat said.

“The Sri Lankan side informs us that the former president has no intention for political asylum in Thailand and will travel to another country afterwards.”

A close associate of Rajapaksa told the AFP news agency in Colombo that Rajapaksa’s Singapore visa was due to expire on Thursday. “He had applied for an extension, but it had not come through as of Wednesday morning.”

Rajapaksa has made no public appearances or comments since leaving Sri Lanka.

Singapore’s government said this month that the city-state had not accorded him any privileges or immunity. 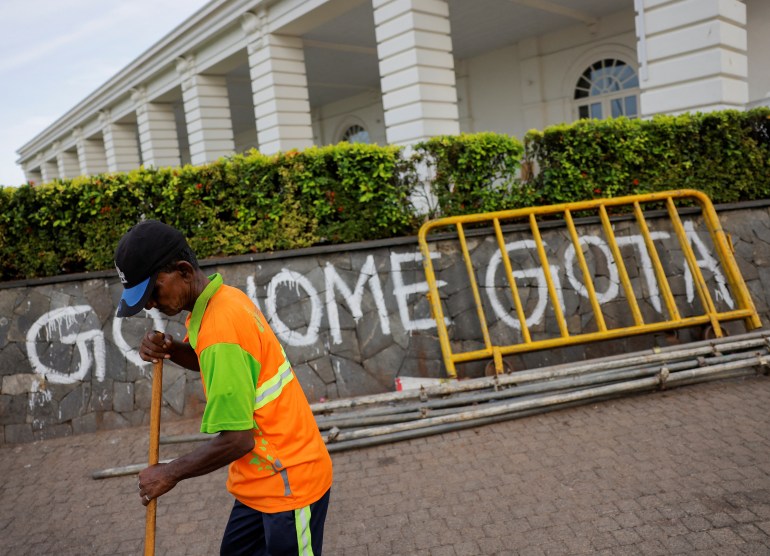 Protesters gatheres near the president’s official residence during the demonstrations in July [File: Dinuka Liyanawatte/Reuters]

A member of the influential Rajapaksa family, the 73-year-old served in the Sri Lankan military and later as defence secretary.

During his time as defence secretary, government forces defeated Tamil Tiger rebels in 2009 to end a bloody civil war. Some rights groups now want accusations that Rajapaksa committed war crimes to be investigated. Rajapaksa has previously strenuously denied the allegations.

Some critics and protesters also accuse Rajapaksa and his family of mishandling the economy during his term as president, leading to the South Asian country’s worst financial crisis since independence from Britain in 1948.

His elder brother, Mahinda Rajapaksa, is a former president and prime minister. Their younger sibling, Basil Rajapaksa, served as finance minister until earlier this year.

Rajapaksa’s successor, Ranil Wickremesinghe, has suggested that the former president should refrain from returning to Sri Lanka in the near future.

“I don’t believe it’s the time for him to return,” Wickremesinghe told the Wall Street Journal in an interview on July 31. “I have no indication of him returning soon.”

If Rajapaksa came back to Sri Lanka, he might not be protected under the law if any charges were filed against him, legal experts have said.