Sri Lanka plans to reduce the size of its bloated military by about a third by 2024 as the government of the bankrupt island struggles to contain a devastating financial crisis.

More than a decade after the end of a brutal civil war, Sri Lanka maintains one of the world’s largest armed forces, on a relative basis, with 200,000 army personnel alone.

Premitha Bandara Tennakoon, the junior minister of defence, said the government planned to cut its size to 135,000 army personnel by 2024 and to 100,000 by 2030, according to a press release from the defence ministry on Friday.

Military spending is the largest item in the south Asian nation’s budget at a time when President Ranil Wickremesinghe is trying to finalise a debt restructuring deal with lenders and a $2.9bn IMF bailout.

Although it did not address spending specifically, the defence ministry statement said the reduction was part of a “strategic blueprint” designed to foster a “well-balanced defence force by the year 2030 in order to meet upcoming security challenges”.

Sri Lanka defaulted on foreign debt repayments last year, the first in the Asia-Pacific region to do so this millennium, fuelling widespread anti-government protests as supplies of everything from fuel to food ran low.

The country of 22mn people, which owes more than $50bn to foreign creditors, is in debt talks with large creditors including China and India. They must agree to support a restructuring before the IMF will start releasing the bailout funds, which were agreed last year.

Economists have long argued that reining in military spending is necessary to control Sri Lanka’s finances. About half the government’s salary bill goes towards the security forces, while military spending remains higher than at its peak in the civil war, even when adjusted for inflation, according to a National University of Singapore study published in 2021. 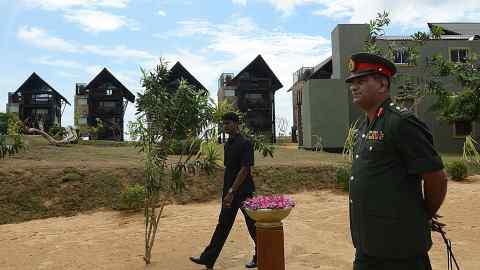 Sri Lanka’s armed forces swelled as the country fought an almost three-decade civil war against the Liberation Tigers of Tamil Eelam, who wanted a separate state for the island’s Tamil minority. As many as 100,000 people died during the war, with both sides accused of atrocities before the army crushed the insurrection in 2009.

Little progress has since been made on reforming the military. Campaigners say the disproportionate number of troops still stationed in Tamil heartlands in Sri Lanka’s north and east leads to continued human rights abuses.

Wickremesinghe said in September that his government would re-evaluate the country’s military strategy. But some analysts were sceptical about Friday’s statement, arguing that more details were needed on how the authorities would proceed.

The minister’s statement was an “initial” indication that required more clarification from the government and president, said Bhavani Fonseka, a human rights lawyer. “Whether they’re genuine remains to be seen, but if they’re genuine, it’s a first step to addressing the bloated size of the military.”