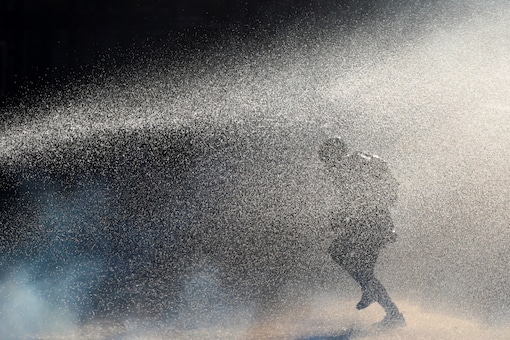 Tamilians in Sri Lanka protested the scheduled visit of President Ranil Wickremesinghe by gathering near Jaffna University on Sunday. To disperse the protesters, the Sri Lankan police fired water cannons at them. However, in a gesture of defiance, the protesters whipped out shampoo and began to wash their hair in the water that was being sprayed at them. Visuals from the protest were shared by Tamil Guardian journalist Dr Thusiyan Nandakumar on Twitter.

Tamil Guardian visuals also showed protesters throwing water mixed with cow dung at the police during a clash in Nallur. The Sri Lankan police put up barricades at the Nallur Arasati Road-Vaiman Road intersection where the protesters were rallying, the outlet reported. Water cannons were fired on the protesters when they tried to push past the barricades.

Bankrupt Sri Lanka will drastically slash its military, the defence ministry said Friday, as the government works to overhaul its shambolic finances after an unprecedented economic crisis, as per an AFP report. The island nation is still reeling from months of food and fuel shortages that made daily life a misery for its 22 million people last year.

President Ranil Wickremesinghe has hiked taxes and imposed harsh spending cuts to smooth the passage of an expected International Monetary Fund bailout following a government debt default. Sri Lanka’s armed forces are next on the chopping block, with the defence ministry announcing it would retire 65,000 soldiers from its 200,000-strong army over the year.

The cuts make up the lion’s share of plans to downsize Sri Lanka’s land forces to 100,000 by the end of the decade. “The overall aim of the strategic blueprint is to broach a technically and tactically sound and well-balanced defence force," a ministry statement said.